In 1967 an argentine publishing house published three pocket books with photographic images. The project involved, among other figures, the photographers Grete Stern and Humberto Rivas, the artist Rogelio Polesello and the critic Jorge Romero Brest. The three publications make up the publishing house's succinct catalogue: an incomplete program that multiplies its limitations by the broad gesture of a collection. If every collection tries to replace a totality, the three titles of the publishing house Buenos Aires try to collect, in different directions, the resemblance of things, to complete their presence with the gesture of a register that wants to be transparent. What does it mean to reproduce an object? What are the inflections of this attempt to capture being in its fullness? Like the collection, each image fails in this attempt to cover a totality that is always supposed to be external to it. With the similarity as a territory, the project invites us to go through the different inflections of that fall, to measure the interval that is opened each time between the photograph and the thing.

In collaboration with Juan Cruz Pedroni
72 photographs taken from original books
8x12 cm each one. 2018 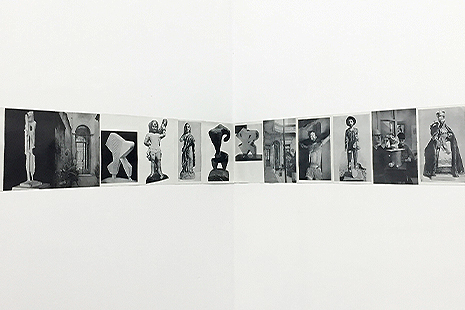